The Rules of Life: Katerina Lisakovich 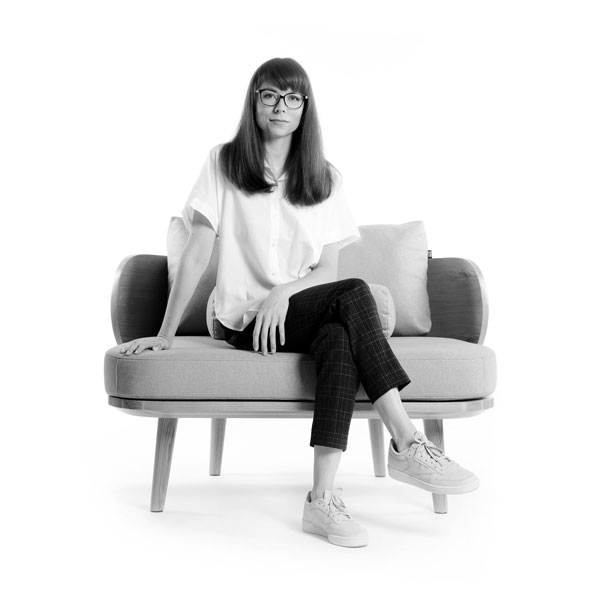 “Design is a dialog”

I'm not an architect. I studied on the it-specialty, but I realized that I would not be a programmer or a teacher of higher mathematics. After graduation, I took courses in interior design and worked in the studio on few projects. At the same time I got an art education. I always liked to draw, create something with my hands, work with materials.

Then it became interesting for me to try myself in mass production and to create design not only for a specific family, but for a large number of people. I took a thematic course on Coursera - very practical, aimed at the needs of human and, last but not least, at aesthetics. I liked it, so I began to look for other learning opportunities. And so I came to the ODESD2 design school.

The importance of education cannot be discounted. I still feel its lack, I try to compensate. The designer should be open to the world, cultivate the taste. We need to look around to understand what is missing in the place where you are now.

I was very surprised by the history of northern design: in the middle of the nineteenth century, the state saw that the people became poorer with the industrialization of cities and attracted artists to industrial production in order to create a comfortable environment for workers. The idea was to solve the problems of the people not only by economic methods, but also with the help of aesthetics. It was more than a century ago! Unfortunately, we have not come to this yet due to too much stratification of society.

At the same time, it seems to me that Ukrainian design is just at a very cool stage. Everyone is looking for their style, their voice. Anyway, we are adopting a successful European and American experience, still looking in that direction.

Since I am at the beginning of the journey, I take our designers as an example — an example of experience, cooperation in world arenas, an example of how to declare oneself. It inspires me: if they do it, then it will work out for me.

Wing series was born, first of all, because of the interest in the material - plywood, which can be bent and which can be given organic form. I was inspired by the works of genius Eams, who experimented with it.

At first I saw the Wing series items in a living space where there is a large family, children, and pets. But I also thought that they would be appropriate in lounge areas, restaurants, hotels. Therefore, the series is quite universal.

At first I designed a sofa with a shelf, he dictated the style. We started the project implementation with a chair prototype in order to test the production technology. Coffee tables - a logical continuation, the addition to the entire series - will be made next.

The Wing chair is my first serious project in the product design, it was not thought out to the details. However, the final object is minimally different from the original idea, I am proud of it. Together with the technical designer, we figured out how to connect the parts, hide the mount. It was necessary to create a solid stable construction, while retaining the effect of soaring back. Construction was made really unusual. We managed to produce wooden parts almost from the first time, without any changes. While working with the fabric, we still made small changes to the original image.

I am also creating a boudoir table with ODESD2. It is curious that in the process of designing it turned into a functional desk. On the one hand, you create something that you would like to use yourself, and on the other hand, you try on the role of a person who uses this object, live in a role, and not just express your “Me” and your vision.

I do not think that it is possible to distinguish objects created by men or women in the product design. The task can be solved by anyone, and this is interesting: do it in your own way. It’s all about the focus: for whom this object was created, what kind of emotion do you want to create with it. But the main role is still played by experience, education, skills, and not that you are a woman or a man.

When I sit at the table, I work in the traditional sense. But in my head the workflow never ends. You can wake up the next day and understand something, find the desired shape, detail, unexpected solution. This is a permanent process: there is a task, and you have to solve it both practical, and beautiful, and eco-friendly, and ergonomic. At some point, all these points converge.

I am fascinated by the skillful combination of details, especially wooden. In this sense, I really like the Danish design of the middle of the last century. This is a fusion of the skill of carpenters and outstanding designers. Objects have catchy designs, they are harmonious and durable.

I want to promote the global trend for sustainability in our design: use recycled materials, certified wood. We have these opportunities now, just need to carefully monitor the production at all stages, insist on your decision. For me, this is an important landmark, an important vector that I would like to adhere to. I want people to choose things more thoughtfully, to use them longer. As a designer, I feel responsible for these processes, for what values I broadcast.

There is definitely creativity in design, but it is one of many components. A designer is not only a person who knows how to draw and invent beautifully. This is a researcher and thinker. It is impossible to stop learning.

Of course, design is an art in some sense. But, above all, it is a dialogue in which the designer is involved. He must respond to the demands of society and solve them. All the innovations that designers develop are not just improving life, they are changing it.

My design will never be directed against a human, against his health. And in the issue of design and style, I would not set myself a framework.

Now I would like to implement a socially significant project, I want to solve a small problem that is important for some part of our society with the help of design. I already have a few ideas.